The ending of the Dr. Stone manga has fans around the world either petrified, exhilarated, or, well, just plain disappointed.

The final chapter of the Dr. Stone was released on 7th March, 2022, the fifth-year anniversary of the series, bringing the most popular science-themed manga to a somewhat abrupt end.

Riichirou Inagaki, the writer of the manga, had earlier stated that he would never stretch out the story just for the sake of it. While we appreciate this sentiment, nobody thought that it would all end so soon.

1. Was the Dr. Stone Ending too Rushed?

It feels like the entire Why-Man storyline had just begun. For the entire series to conclude just a few chapters after the identity of Why-Man was revealed, does seem a bit rushed.

I know a Shonen Jump finale is a tough thing to execute. Everybody expects a perfect final chapter that balances conflicts and ties up loose ends – at least enough to satisfy fans who have been following the serialization since chapter 1.

The Moon Mission arc in Dr. Stone could definitely have been explored more. It’s the only arc in the Stone to Space saga – bringing humanity back into space after more than 3700 years deserves more than just a single arc.

But then again, it’s tough to argue about logical pacing within the world of Dr. Stone. Senku is a literal superbrained genius, who rediscovers and recreates things like antibiotics, cell phones, GPS, automobiles, electricity, armored tanks, and space rockets in less than a decade.

But the ending seemed rushed and abrupt primarily because we did not delve as deep as we should have into the Why-Man-Medusa plotline. After all that buildup to finding the source that turned humanity into stone, it felt a little anti-climactic, more than anything else.

Senku and his crew landing on the Moon was more exciting than the revelation of Why-Man. According to me, the arc should have ended with the moon landing, and the confrontation with the antagonist, Why-Man, should’ve taken a separate arc, or at least 10 more chapters to conclude properly.

Some people find the ending rushed because they are used to “final battles.” These kind of hero vs. villain fights subsume all plots and characters, to pulp out an epic ending that draws over the course of several chapters.

The last chapter of Dr. Stone doesn’t have any sort of grand battle. In fact, it doesn’t have a battle at all. This is completely fine, given the context. Dr. Stone isn’t about battles. It’s about the ideology of science and progress.

What is annoying is that we didn’t have enough time to dwell on our villain at all.

I’m not even mad about Why-Man being alien technological parasites. I know people were expecting something more exciting than AI to be the big bad final villain, but the Medusas being the Why-Man was actually quite a good twist.

What I have a problem with is the fact that the whole immortality question raised by Why-Man is not really addressed at all.

Why? Do you want to die?

Why-Man’s gift of immortality should have been milked more: The consequences of virtual immortality, the meaning of being alive, and whether humanity deserves to, or can even handle the concept of living on for eternity.

The Dr. Stone manga ends with chapter 232, where Senku is in the process of building a time machine with the help of the actual Why-Man brought back from the Moon. Senku wishes to save all 7 billion members of humanity.

Senku and the group of international scientists on his team refer to this mission as “the baaaad science project.” The project was only made possible because of the “actual” Why-Man, the one live specimen that chose to stay behind and accompany Senku back to Earth.

This in itself is pretty exciting, because, first of all, it proves that the Medusas don’t really have a single consciousness and are capable of free will.

The time machine is as yet incomplete and the scientific team – including Why-Man – has not yet decided what they want to use it for. These are the 3 options they are contemplating:

In addition to this, we also see Gen acting as a world diplomat, conducting shows and speeches to create positive relations between the new world, especially the kingdoms of America and Japan.

Taiju and Yuzuriha finally get hitched and Chrome tells Ruri that they should also get married after they finish the “baaaad science project.”

3. Is the Dr. Stone Ending Disappointing or Satisfying?

The ending of Dr. Stone is both disappointing and satisfying in equal measures. For every con there is also a pro that I can think of, which makes the ending just right, albeit a bit rushed.

Starting with the biggest issue most people, including me, have: the Why-Man problem. Where did they come from? Who created them? Why did they leave without putting up a fight?

In chapter 231, I personally, was expecting more of a show. It’s finally Senku vs. the Why-Man, the force behind the petrification of all of humanity – but there isn’t any fight.

Why-Man boasts about being able to assume human form and defying gravity but nothing really comes out of that.

Why-Man stays in their huge-ass skeleton form, and decides to abandon Earth because humans are not capable of helping them reproduce and also because, as Senku says, they are not stupid enough to attack their hosts.

Senku gives his own example to the Why-Man, and wields his stone hammer. He says that he came into this new stone world with nothing and in 10 short years, despite all the odds being against him, took humanity into space and landed on the Moon.

This argument ignites the curiosity of one Medusa device. It says that the probability of teaming up with humanity to craft something new might be near zero percent, but it would wager everyone on humankind for the sake of new discoveries.

Dr. Stone might be Shonen, but it’s a science manga, more than anything else. The essence of it is science and the advancement of technology.

Senku’s mere idea of creating “something outta this world” excites the actual Why-Man, and it offers its body up for analysis even at the cost of its own death. This perpetrates the idea that even enemies can come for the sake of science.

Humanity ends up with a single piece of futuristic technology that actually helps it create a time machine. Some people think it was a mistake on Boichi and Inagaki’s part to include something like time travel in an otherwise scientifically accurate story.

But, as Senku says, a time machine was only a scientific impossibility in the 21st century. Millenia later, with the help of alien tech, it is not that far-fetched a dream.

Of course, time travel presents its own set of paradoxes and problems, but this is Senku we’re talking about here; the guy single-handedly evolved all of humanity from the Stone to the Modern age. He’ll ten billion percent figure it out.

All the Medusa devices (except one) abandoned their plan to parasitize Earth and vanished into deep space when they realized humans were basically not smart enough to help them survive and procreate.

With one little guy remaining, we thought there was still a chance of getting some answers, like where the Medusas came from and who created them in the first place.

When Kohaku questions the actual Why-Man about its origins, it replies saying: “Does your king comprehend who or what created you? Do you possess complete knowledge of your origin?”

While this doesn’t give us a solid answer, it does make us think – and leave the story open-ended.

The snippets of conversation between Why-Man and the space crew is enjoyable in that it underlines the driving force of the manga itself.

Senku tells Why-Man that the primary objective of all life forms isn’t survival at all, but questioning the unknown – asking the WHY.

Science strives to answer the why one step at a time, no matter how many eras pass it by. There will always be someone that questions the ways of the universe, and science will forever be reborn.

This is also why the time machine makes sense: Science pierces across time itself.

The whole series has been about progressing the past so it can catch up with the future. The final chapter of Dr. Stone attempts to use the future so the past doesn’t have to catch up at all.

So, while most people believe that the Dr. Stone ending was disappointing, I don’t fully agree. Sure, it ended a bit abruptly and the Why-Man vs. Senku fight was underwhelming. But the ending justifies the beginning, just like the lack of a full-blown battle justifies Senku’s philosophy.

The manga stays science-centric to the very end, which is something to be applauded. Inagaki and Boichi’s research sure did pay off.

To top it all off, we still have a special manga chapter to look forward to. It is set to release before the Dr. Stone: Ryusui anime special airs, in the summer of 2022. The manga still has a shot at appeasing its unsatisfied fans! 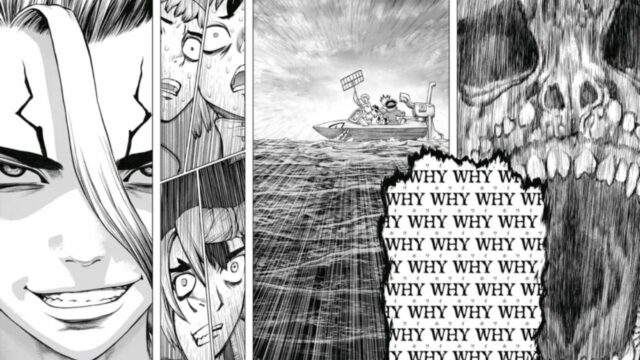