Kimetsu No Yaiba is not one to shy away from deaths, and unfortunately, the Flame Hashira, Rengoku, became its victim this time around.

While the Kimetsu No Yaiba’s manga reached its end, the anime has yet to conclude, as a considerable chunk of its storyline has yet to be adapted.

With the Mugen Train movie announcement, fans of both the anime and manga are really excited. However, the latter’s excitement is also because of a different (sadistic) reason.

As every fan is aware by now, thanks to the overabundance of spoilers, Kimetsu No Yaiba is home to a world of pain. The anime-only viewers are going to experience a tiny portion of it in the movie titled Mugen Train.

Finally, the manga readers will get to openly express their grief, as well as gloat a little over experiencing it.

The source of the fans’ grief in this movie is going to be the Flame Hero Rengoku, who had quickly attracted their affection.

With his strong personality and brilliant yellow and orange hair, no one disliked him. Unfortunately, the Mugen Train almost acts as a death trap for him.

[SPOILERS FROM THE MANGA]

Contents
1. Does the Flame Hashira Rengoku Die?
2. How Does the Mugen Train End?
3. Will Tanjiro Become the New Flame Hashira?
4. About Demon Slayer

1. Does the Flame Hashira Rengoku Die?

The Flame Hashira, Rengoku, died in the Mugen train when fighting against Akaza, an upper rank three demon. After being defeated, he entrusted his will to Tanjiro and passed away.

Just after Tanjiro and Inosuke successfully defeated Enmu, Kyojuro Renguko checked out Tanjiro’s wound in the train, when an Upper Rank 3 demon, Akaza, jumped in between them and started attacking the duo.

Without wasting a moment, Rengoku quickly unleashed his Flame Breathing: Second Form – Rising Scorching Sun attack, and cut the demon’s arm in half.

With this move, both the Hashira and the demon started a full-blown fight, with Tanjiro and Inosuke at the sidelines.

Both Rengoku, with his powerful swordsmanship, and Akaza, with his raw strength, were evenly matched; however, as time passed, the latter gained an upper hand thanks to his regeneration.

In between their fight, Akaza was amazed at his opponent’s sword skills and offered to turn him into a demon, thus gaining infinite time to refine them.

After Rengoku refused, Akaza’s attacks became even more volatile, resulting in the former losing his left eye and becoming injured.

As they clashed again, Akaza stuck his arm through the Hashira’s stomach, bringing him to death’s door.

Before dying, Rengoku summoned the last of his strength to swing his sword into Akaza’s neck; however, just before the sword cut off his head, Akaza managed to pull himself away.

Realizing that the sun was about to come up, the demon ran away as Kyojuro lay defeated and dead.

2. How Does the Mugen Train End?

The Mugen Train arc sets off with Tanjiro, Zenitsu, and Inosuke buying tickets for the Infinity Train in search of Rengoku, the Flame Hashira, hoping to get some information on Hinokami Kagura.

Unbeknownst to them, Enmu is assigned to kill Tanjiro Kamado in order to become an Upper Rank. Taking advantage of the fact that the demon slayers have touched his blood, he uses his powers to attack them using dreams as a medium.

However, thanks to Nezuko, Tanjiro, and others manage to wake up and fight Enmu. The battle results in them suffering fatal injuries, but they still manage to defeat the demon.

Just as the Flame Hashira, Rengoku, is inspecting Tanjiro’s wounds, an upper rank 3 demon, Akaza, comes out of nowhere and starts his attacks.

Due to the latter’s monstrous strength and regeneration, Rengoku loses both the fight and his life in the process.

With the Hashira calling Tanjiro for a final talk and entrusting him with his will, Rengoku passes away, thus bringing the arc to an end.

When Rengoku first met Tanjiro, he strongly disliked him due to breaking the demon slayer code and protecting Nezuko.

However, after meeting and spending time with him on the Mugen train, Rengoku started respecting Tanjiro. He often gave him advice on becoming stronger and even accepted him as his successor.

With Rengoku dying and entrusting his will to Tanjiro, many believe that the latter will take over his place as the Flame Hashira. This is especially so after considering the fact that Tanjiro’s original breathing style is based on fire.

However, the truth is that Tanjiro uses the exceedingly rare Dance of the Fire God, i.e., the Sun Breathing style, which is the origin of all other forms.

Due to this, it is completely different from the Flame Breathing style, despite the similar-sounding names.

Tanjiro will not become the new Flame Hashira after Rengoku because the Breath of the Sun is completely different from the Flame Breathing style.

Furthermore, with the death of Rengoku and his father and brother, the line of the Flame Hashiras has died with him. 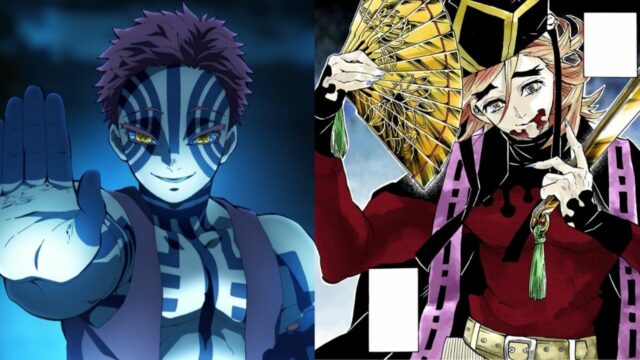 Who is Stronger, Akaza or Doma?