Aikatsu Planet is part of a series based on an arcade card collectible game called Aikatsu.

The game inspired a TV anime franchise that serialized from 2012 to 2019 with four adaptations and three movies.

Now, the fifth project will be airing next year, but it will be quite different from its previous adaptations. Let’s see what’s that.

The upcoming anime will be live-action and anime hybrid adaptation made by BN Pictures.

Aikatsu Planet! will be the first series in the franchise to be produced into a live-action hybrid and will be broadcasted from January 10th, 2021.

AiTube, the official YouTube channel for the Aikatsu franchise, announced that the hybrid anime show would be aired on TV Tokyo and its affiliates.

It was said to release this Winter but was delayed. What happened?

The staff had previously planned to premiere the new project in the late-2020 and planned to announce more details in June.

But due to the Covid-19 pandemic, it delayed the TV premiere to January 2021. It also announced that the accompanying arcade card game would debut this Winter.

I. Popularity of Franchise

An anime adaptation of Aikatsu began in 2012. The popularity of the game and the anime subsequently led the way to three films being released over the years and 3 other anime.

Three manga adaptations have been published by Shogakukan along with four Nintendo 3DS games.

A light novel was published in 2013 featuring illustrations by Kyo Nagiri. The first two movies earned more than 100 million Yen at the Japanese box office on the first weekend.

The anime has utterly charmed its way into the audience’s hearts.

Fans say that the show puts them in a good mood, helping them calm down on a bad day.

Being an ‘idol’ show, the music and choreography are very good. The anime shows the dedication of idols as they start to rise from the bottom to the top.

The characters’ potential is explained in the way the girls train, suffer, and meet allies and rivals.

The entire franchise is well-liked by the fandom, Aine’s cheerfulness from Aikatsu Friends, Ichigo’s charm to speak a few.

The show feels like an actual idol reality show as we get to see them transform from low rankers until they can perform on the stage and shine on their own.

The visual style of the characters, the use of gradient colors on hair, and the appeal of the art is a major factor that attracts the viewers to watch this show again and again.

But with the fifth project being a hybrid, will there be a change in how it looks??

A key visual of Aikatsu Planet is released! The show is developed with live-action and animation! Unique idols Otowa and Hana will make up the world of Aikatsu Planet. The tagline of the show is: To become the ‘me’ I want to be; I enter the mirror!

The story is set in Aikatsu Planet, where everyone can become cute idols using an avatar While spending school life, the main characters aim to become top idols!

However, Mao’s new role as the avatar Hana is a secret to everyone else.

The Aikatsu Planet! idols can dress up in fashionable and cute dresses using the item Swing, which is inhabited by the dress fairy Dresia.

Mao, who has become Hana, uses the Swing to fight against her rivals in the exciting battle stages.

Everyday parts such as the main character’s school life will be filmed in live-action and the Aikatsu Planet! world will be drawn in anime and 3DCG.

The anime’s official site stated that the project would use anime and CG to depict scenes in the Aikatsu Planet, the world of idols. In comparison, it will use live-action footage to depict Mao’s daily life.

America has used this technique of combining animations and live-action in many films like Mary Poppins and Space Jams.

Here live-action actors interact with an animated character. But Aikatsu Planet is different in that it was adapted from an anime and it has the particular ‘anime’ aesthetic.

The hybrid animation is accepted worldwide, so there is no fear of the anime being unliked by the viewers.

The series contains a variety of theme songs and insert songs. Many of them are composed by monaca and performed by Japanese idol groups, STAR ANIS, or AIKATSU STARS!

This season’s opening song, Bloomy Smile, will be sung by the characters Mao, Ruli, Kyoko, and Shiori.

While a new unit Starry Planet will perform the theme song, Happy Aikatsu.

The songs of all seasons have been compiled into albums and performed in live concerts. This season too, undoubtedly, will deliver excellent songs for the fans.

Many fans of the original anime wish that the live-action scenes only take up the few parts at the beginning and the end.

Others are rather skeptical how this blending of 2D and reality would work together, and if it would seem alright.

While the general audience seems pretty keen on this new hybrid style of animation, the designs and the actors all are beautiful and that is just the cherry on the cake.

The anime series follows a girl named Ichigo Hoshimiya, who becomes inspired by a performance by top idol Mizuki and enrolls in Starlight Academy alongside her best friend, Aoi.

Along with their classmate, Ran, Ichigo and Aoi spend each day training for auditions and aiming to become top idols.

As they journey through the numerous laughs, friendships, and heartbreaks that await them, the two girls yearn to light up others’ lives as Mizuki has done for them.

Whether it be chopping down Christmas trees, traversing obstacle courses, or even rock climbing, there’s always a playful new adventure in the Idols’ world.

Yume Nijino has been accepted into Four Stars academy, home of the beautiful and talented S4 idol group.

At the first-years’ opening performances, Yume performs spectacularly but faints and is unable to remember being on stage at all.

Struggling to find her talent, she meets Rola and the two develop a friendly rivalry, working together to learn and improve.

She and the other newcomers are determined to discover their talent, with a choice of specializing in beauty, singing, dancing, or drama to become the next S4 idol.

She meets Mio from the idol division who invites her to join Aikatsu to help fulfill Aine’s goal to make friends.

She also befriends Maika and Ema who are also idols. Aine and Mio form a pair to become best friends to become the bright Diamond Friends.

This is Aine’s story of her path to stardom.

Raki Kiseki is a second-year middle school student who transfers to Star Harmony Academy to become an idol.

However, when she uses an Aikatsu Pass she received from her big sister (an Aikatsu engineer), something mysterious happens.

Lots of doors appear before her, and when she opens them, she meets Aikatsu idols she never knew, such as Yume Nijino (Aikatsu Stars!).

Raki vows to design her premium dress and perform in it on stage.

The following are the cast and staff members for Aikatsu Planet:

The series takes place at Starlight Academy, a prestigious school with both middle and high branches, where girls train to become idols and take part in various auditions.

To participate in these auditions, players use Aikatsu cards which are special cards that contain digitized dresses and accessories from various manufacturers that are used in their auditions.

How well they succeed is often dependent on choosing the right combination of cards.

The stories focus on students who must train to become an idol and reach the top. 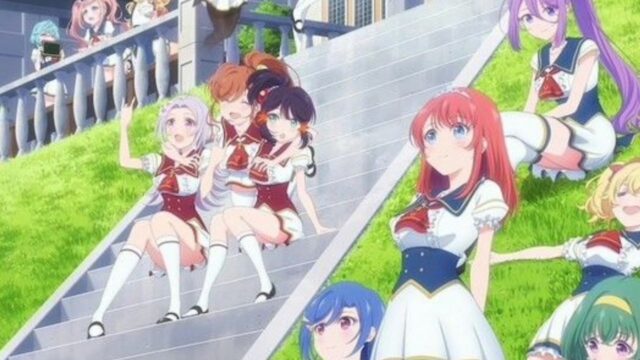 Is Lapis Re: Lights worth your time? – Full Review