A3! is a smartphone game which was released in 2017. A two-part anime adaptation based on the game was announced last year and the first part A3! Season Spring and Summer was released worldwide in April 2020.

The exciting musical drama will be releasing soon, and fans of the game can’t wait for the next episode!

So, when do we get to watch A3! Season Autumn and Winter?

Table of Contents
1. Release Date
2. Cause of Delay
3. Popularity of Franchise
I. Fans’ Reactions to Part 1
4. Expected Plot
I. Fans’ Expectations for Part 2
5. New Key Visuals and Trailers
I. The Autumn Troupe
II. The Winter Troupe
6. Anime Production
I. About the Studio
II. Animation Quality
III. Director
IV. Theme Songs
7. Recap
8. Cast & Staff
I. Staff
II. Cast
9. About A3!

The two parts of the A3! anime series were aptly named A3! Season Spring and Summer, and A3! Season Autumn and Winter.

The A3! Smartphone game’s company, Liber Entertainment, announced that A3! Season Autumn and Winter will premier on 12th October 2020. P.A. It will be available to stream on Hulu and Funimation.

The anime will be streamed on Funimation as well, just like Part 1.

But according to its previous announcement, Part 2 was supposed to come out in July 2020, so what happened?

READ:  A3! Season Autumn and Winter Slated For October 2020

Episode 4 of A3! Season Spring and Summer was delayed due to production issues.

It was continuously postponed for two weeks, until it was announced that the entire season would be rebroadcast from the beginning in April 2020.

As if the initial setback wasn’t enough, the COVID pandemic also played a role in delaying Part 2’s release.

A3! Season Autumn and Winter was originally scheduled to premiere in July 2020 but will now air in October 2020.

But due to the unwavering fanbase and sincere efforts of the production team, the anime can finally see the light this Fall. But why does it have such an extensive fanbase?

Liber Entertainment developed a mobile game called A3! (short for Act! Addict! Actors!) in 2017. A3! was nominated for the Google Play Best of 2017, and it cumulated a total of 2 million downloads.

Its success led to several adaptations of the franchise, including stage plays and an anime series. A series of stage plays under the name Mankai Stage 3 have been produced.

It also led to the cast of Mankai Stage 3 hosting a radio program that was broadcasted on Nippon Broadcasting System.

I. Fans’ Reactions to Part 1

An anime centered around a group of boys living under the same roof, training their hardest to debut on stage one day, is an interesting premise, but not original or unique.

Fans like how A3! talks about creating a theatre troupe, how it is organized and how the acts are carefully done for a successful performance.

The original 1 & 2 arcs of the game had already set this up, but the anime was well received in terms of scripting.

The boys in the Summer and Spring troupe have good chemistry on screen, well-meshed personalities, and it helps in smoothly moving the story forward.

The show is surprisingly well-paced, giving each character attention, letting them tell their stories on what moves them, and why they want to become a part of the troupe.

Now A3! Season Spring and Summer ended with the characters achieving their goal. What will happen once the Winter and Autumn troupe join them?

As a sequel to the Spring and Summer arc, some similarities in the plotline will remain, but new actors will add a dash of originality to the anime.

Izumi Tachibana is still busy in rebuilding the theatre company after becoming its director.

A3! Season Spring and Summer ended on a happy note as the Spring troupe and the Summer troupe performed Romeo Juliet and a comedic 1001 Nights.

The next arc will focus on solving internal differences among the members.

The Autumn troupe will perform action stage plays, and the Winter troupe, on the other hand, will focus on sad and heart-wrenching plays that suit the cold weather of Winter.

There are many scenes from the mobile game that the fans were overjoyed to see on screen. So, what do they want to see?

I. Fans’ Expectations for Part 2

While others want to see the emotional monologues that the next arc will be filled with.

According to the game’s players, the Autumn troupe will have more in-depth character development, and the story will be more focused on the company as well.

The wishes of the audience are simple: good animation that the Autumn arc deserves, and music as good as before.

The animation of the previous season didn’t match the fans’ expectations, but due to the pandemic, they were given the benefit of the doubt.

Now, let’s move on to reveal the new actors of the Mankai Company!

The official website for the anime unveiled a new visual for the A3! Season Autumn and Winter, highlighting the Autumn troupe.

The key visual for the TV anime “A3!” SEASON AUTUMN has been lifted! Autumn group start!

I. The Autumn Troupe

However, the focus remains on the animation that P.A. Works will produce, and would it be better than Part 1?

Let’s look into the technical details of this upcoming anime to check what influences the production of ‘A3! Season Autumn and Winter.’

The anime is a collaboration between two studios, P.A. Works and Studio 3Hz.

P.A. Works is a famous animation studio known for its animation of Charlotte, Angel Beats, Another, Glasslip, Fairy Gone, Canaan, and many more.

The characters are handsome and visually very appealing. But they sometimes look like they don’t belong to the anime with the slightly off-putting facial expressions.

However, there was much improvement in the later episodes, and the characters managed to blend in with the animation.

Seeing the beloved boys talking and being animated on the screen was a real treat to the viewers who had played the game before.

Let’s see if the Autumn and Winter arc would have improved in these small details or not in October.

Keisuke Shinohara has directed Black Fox other than the A3! Season Spring and Summer.

He has also directed episodes of Little Witch Academia, Actually I Am, Devilman Crybaby, and more.

The opening theme, still untitled, will be performed by A3ders! and is scheduled to be released on October 21st, 2020.

Finally, let’s recollect the previous season to understand more about the troupes of Maikan Company.

Mankai Company used to be an exceptional all-male theatre in its prime days.

However, when Izumi Tachibana gets a letter from the company, she sees that it is neck-deep in debt to a yakuza, and there is just one member with love for acting but no experience.

So, she takes on the challenge of paying off all the money in a year and recruiting actors to make four troupes: Spring, Summer, Autumn, and Winter, each with successful debuts.

It is no easy feat, but hereon starts the journey of making the Summer and Spring troupes for a comedy and romance.

The cast and staff for the upcoming A3! Season Autumn and Winter season may not be changed from its previous season:

A3! Season Autumn and Winter is the sequel to A3! Season Spring and Summer anime.

Mankai Company is a theatre company for actors, who are split into four troupes and named after the four seasons: Spring, Summer, Autumn, and Winter. Now, Mankai Company is at the risk of shutting down. So, Izumi Tachibana finds herself responsible for reviving the company to its lost glory after it sank under debts. 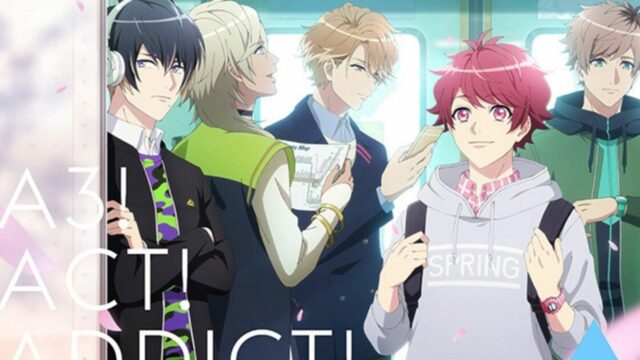 A3! Season Autumn and Winter Slated For October 2020